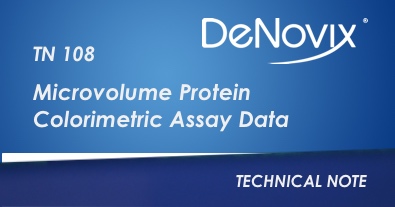 The optimal spectrophotometric method for determining the concentration of a protein is dependent upon both the protein and the sample buffers used. Direct measurement of the absorbance at 280 nm is generally applicable when working with purified protein solutions, while colorimetric methods are routinely used for cell lysates and uncharacterized protein solutions.

Colorimetric assays are also used when the protein is suspended in a solution, such as a RIPA buffer, which has a strong absorbance signal in the UV range. Such buffers will interfere with the accuracy of a direct 280 nm measurement.

The DeNovix® DS-11 Series software, EasyApps®, includes a Colorimetrics app that is optimally configured for the four most common assays. The purpose of this technical note is to present typical DS-11 data for each of the four assays included in the app.

The colorimetric assay kits used in the studies were as follows:

Each assay was performed according to the manufacturer’s directions for the concentration range tested. In brief, tubes of the seven pre-diluted protein standards, along with a PBS buffer only sample, were mixed with the respective assay reagents and incubated as described below.

The detergent compatible bicinchoninic acid assay (BCA assay) is used to quantify proteins by measuring the Cu-BCA chelate formed in the presence of protein.

The Bradford assay is based upon a protein-induced absorbance shift of a Coomassie Blue dye.

The modified Lowry assay is used to quantify proteins based upon the absorbance of tetradentate copper-protein complexes.

Upon launching the Colorimetrics app, the assay type of interest was selected before navigating to the Standard Curve screen. A Blank measurement was established using 1.5 μL of the 0.00 mg/mL solution. A Standard Curve was then generated by measuring five 1.5 μL aliquots of each standard concentration, prepared as previously described.

Each measurement was done using a fresh aliquot of sample. The sample solution was removed between each measurements by wiping the upper and lower sample surfaces with a clean, dry laboratory wipe.

Note: Particulates can form as a function of prolonged color development when using some formulations of the Bradford reagent. These particulates may result in microvolume mode measurement reproducibility issues. Use optimized formulations for best results.

The information presented in this document demonstrates that common protein colorimetric assays can easily be performed using DeNovix DS-11 Series instruments. The Standard Curve screen enables the user to measure between two and eight standards and up to five replicates for each concentration. EasyApps software allows the user to save routinely used concentration series or standard curve data sets.

The Run screen (not shown) conveniently includes two graphs types for sample measurements. One type displays the sample absorbance spectrum, while the second displays where the sample falls on the standard curve.

This instrument’s ease of use with the four most commonly used colorimetric assays makes the DS-11 the ideal microvolume spectrophotometer for routine protein quantification.