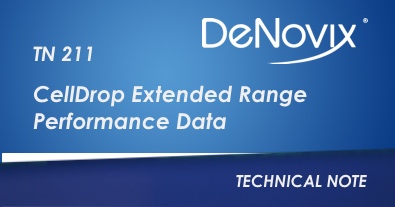 Most slide based cell counters offer only a single 100 µm chamber height. The DirectPipette Technology available on the CellDrop allows the user to choose from three different chamber heights: 50, 100 and 400 µm. These options greatly expand the dynamic range of the CellDrop and allow samples that are too sparse or dense to count at 100 µm to be accurately counted at 400 µm or 50 µm. For example, a sample with 1.5 x104 cells/mL would only have 5 cells in the field of view at 100 µm and the count could be off by 20% if there was a sampling error of one cell. Statistically, this sample would be very difficult to count accurately. At 400 µm the same sample would have 20 cells in the field of view and a difference of one cell due to sampling error would only change the count by 5%. See Table 1 for details about the appropriate chamber heights to use for various cell densities on the CelDrop.

The National Institute of Standards and Technology has proposed a robust method to assess cell counting linearity and reproducibility using serial dilutions to measure the proportional change of concentration on a cell counting device compared to the known proportion of the dilution series (1). A version of this method was tested on a DeNovix CellDrop Automated Cell Counter to assess the linearity and reproducibility near the CellDrop limits of detection.

Low density dilutions of 293t cells were prepared as described in the methods section and ten replicates of each dilution were counted on a CellDrop. The low density samples were counted at a chamber height of 400 µm. Figure 2 presents the linearity and reproducibility data for the CellDrop.

High density 293t cell dilutions were prepared as described and counted in replicates of ten on the CellDrop. The high density samples were counted at a chamber height of 50 µm. Figure 3 details the reproducibility and linearity data obtained from the serial dilution replicates using the CellDrop.

Figure 4 shows a view of the 293t cells after counting using the CellDrop at the 100 and 400 µm chamber heights. The green-fluorescing cells can be seen circled in green by the counting algorithm. While only a a few live cells are seen in the 100 µm chamber the 400 µm chamber is able to load a greater volume and provide a more accurate count at low concentrations.

293t cells were harvested from confluent cultures and centrifuged at 1000 RPM for 10 minutes. The pellets were resuspended in DMEM with 10% FBS and initial cell density was checked on the CellDrop. High density and low density dilution sets were prepared from these cell suspensions. Each dilution was then diluted 1:1 with the fluorescent nuclear stain acridine orange (AO) (DeNovix cat# CD-AO-1.5).

The range of cell density measurements possible on the CellDrop far exceeds that of slide-based counting methods and the data presented here shows exceptional linearity and reproducibility in these extended ranges. Exceptional precision is maintained across all dilutions tested for both cell density ranges and a linear response was observed as demonstrated by high R2 values. The implementation of standard, automated cell counting procedures removes the subjectivity of manual cell counting allowing superior intra- and inter-user reproducibility and consistency of results over time.