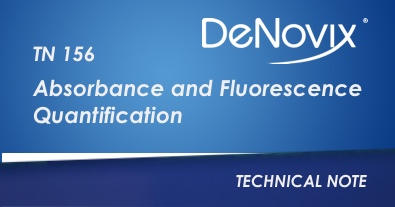 The purpose of this document is to describe and compare the complementary methods of absorbance and fluorescence quantification.

UV-Vis absorbance measurements have long been a standard method for quantification of purified biomolecules in the life science laboratory. This method allows for the rapid detection of molecules based on their absorbance profiles at specific wavelengths.

Absorbance also provides an indication of sample contamination. The shape of the absorbance spectrum will change based on the presence of other molecules that absorb at or near the same wavelengths as the molecule of interest.

Fluorophores are molecules that absorb light at one wavelength (excitation wavelength) and emit light at another (emission wavelength). Certain fluorophores’ structures can be manipulated to fluoresce only when bound to a specific molecule (e.g., double-stranded DNA). Fluorescence assays use this binding specificity to establish a direct correlation between the amount of fluorescence emitted by a sample and the concentration of the biomolecule of interest in solution.

When comparing results from absorbance-based methods to fluorescence-based methods, it is important to consider the specificity of each method. Absorbance measurements at 260 nm, for example, are not selective for dsDNA since ssDNA and RNA also absorb at 260 nm. Any absorbance measurement at 260 nm will be a measure of all nucleic acids in a sample and any contaminants that are present, including proteins. This is true for all types of measurements, not just nucleic acids. Absorbance methods are well-suited to measuring pure samples for this reason.

Advantages of absorbance measurements include:

Absorbance and fluorescence are distinct but complementary methods for quantification and quality assessment of samples. Quantitation via absorbance using the microvolume or cuvette based capabilities of the DS-11 Series is ideal for the rapid and accurate measurement of purified samples, including nucleic acids and proteins. Absorbance will also give information on potential contamination.

Fluorescence quantitation, using a secondary reporter fluorophore, is ideal for samples that fall below the detectable threshold for UV-Vis absorbance. In some cases, fluorescence quantitation methods can also be used to detect samples in the presence of contaminants or buffer elements that would interfere with UV-Vis measurements.