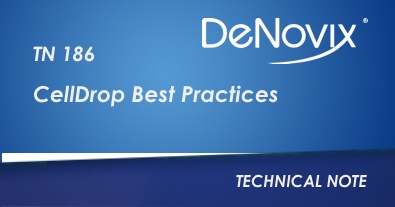 Cells should be trypsinized to completion to minimize clumps. Ensure that a sample is homogenous by vortexing or mixing immediately prior to loading. CellDrop EasyApps® Software contains sophisticated algorithms to identify individual cells within clumps. However, taking care to correctly prepare cells prior to loading will ensure that results are representative of the stock sample.

Correct focus is necessary for proper cell counts. Adjust focus of live cells while viewing the brightfield channel. Touch the focus icon to open the focus control panel. The software includes both coarse and fine focus controls. With optimal focus, the membranes of live cells will appear as a dark ring around a bright white center (Figure 2).

To count cells using the Trypan app, first properly focus on the live cells in the sample, as shown in Figure 2. The Trypan Exposure settings are calibrated to work with commonly used trypan concentrations.

After setting proper focus in the brightfield channel, use the channel selector to choose the green or red fluorescence live preview. Touch the exposure icon to open the exposure control panel. Adjust the exposure so that the intensity is maximized without allowing the signal to exceed the cell boundary (Figure 4).

Switch between the brightfield and fluorescence channels during this process. The fluorescence signal should not appear larger in diameter than the boundaries of the cell when viewed in brightfield. For dual fluorescence applications, exposure in each channel should be set independently.

The Default Protocol in each Count app includes count settings that are an appropriate starting point for counting most mammalian cells. Within any app, users may optimize settings for a result and save those settings in a user defined protocol.

While viewing a results, press the Optimize Settings button to display a list of parameters that can be edited. Technical Note 189 – CellDrop Count Settings includes detailed information about all count settings and how each impact the cell count. Press Count with Current Settings to reanalyze the image(s) using the new settings. Review the result and make additional changes as desired. Save the changes to a protocol using the “Save to Protocol” button. Use the Data app to review results and optimize settings of previous results.

CellDrop sample surfaces are constructed of optical grade sapphire and are highly resistant to lab chemicals and scratches. In normal operation, wiping with a dry laboratory wipe is sufficient for cleaning between counts.

If the cell suspension is not drawn into the sample chamber, clean the chamber surfaces and alignment grooves by flushing the chamber and groove with 70% ethanol as described below.