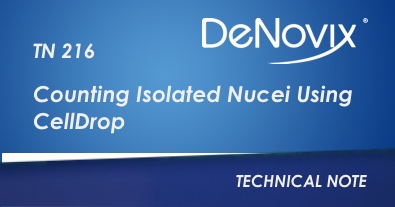 Keep reading to learn how to count isolated nuclei on the CellDrop.

Nuclei were isolated from HEK293T cell cultures according to the 10X Genomics® protocol for the “Isolation of Nuclei from Single Cell Suspensions. CG000124 Rev D.” Before lysis, cell density and viability were assessed using the standard CellDrop AO/PI protocol to confirm a minimum of 2.5 million cells/mL at >90% viability.

Minimizing debris and large clusters is important for the downstream workflow of single-cell sequencing, since these can clog the fluidic chips resulting in low quality libraries or failed sequencing experiments. It is therefore critical for nuclei suspensions to be filtered to remove cellular debris post-lysis. Refer to the manufacturer’s protocol if large clusters of nuclei are observed.

Similarly, removing intact cells that did not lyse during the procedure is also critical. Single-cell sequencing procedures such as those employed by 10x Genomics® rely on isolated nuclei for the technology to appropriately detect expression differences in a cellular population.

Many applications, such as ATAC-seq, require intact nuclei for the technique to work properly. Typically, the sample volume for such methods is a limiting factor, so using a single analysis volume for multiple quality control purposes can be beneficial. The unique DirectPipette™ technology of CellDrop Automated Cell Counters enables counting without disposable slides, and the variable chamber volume allows counting volumes of between 5 and 40 µL of sample. The CellDrop is also compatible with common disposable plastic or reusable slides. This can allow the user to quantify the nuclear isolation on the CellDrop and transfer the same slide to a microscope with a higher magnification for nuclear integrity analysis.

Acridine Orange and Propidium Iodide (AO/PI) are used to determine the success of a nuclei isolation. In traditional cell viability testing, the AO/PI dye combination stains live cells so they fluoresce green and dead cells fluoresce red. However, the stain will also label successfully isolated nuclei red and any remaining intact cells green. This allows the user to calculate the residual intact cells that carryover as a percent of total counted and determine if the experimental workflow can proceed.

As the nuclear pore complex will allow passive diffusion up to 30-60 kDa, both AO and PI (~0.6 kDa) freely pass into the nucleus and will display a red signal due to a FRET interaction between the two fluorophores. Minimizing the number of intact cells in the isolation is important, so accurately enumerating the intact cells with AO/PI can improve quality control and improve consistency in the results of downstream workflows.

The following count (Figure 1) was made using the CellDrop Nuclei AO/PI App to analyze nuclei isolated from HEK293T cells. The CellDrop quantifies isolated nuclei (stained red) and the intact cells (stained green) to calculate the nuclei extraction efficiency for each sample. This data is readily presented to the user on the results screen with other relevant sample data.

CellDrop data provides the user with a count of intact cells vs. nuclei for quality control purposes. All images are automatically saved to the large onboard hard drive and can be inspected for debris using the large HD touchscreen or exported using Wi-Fi, Ethernet or USB. Comprehensive reports can also be generated for printing to network printers or saving as PDF.

Where dual fluorescence instrumentation is not available it is also possible to analyze the success of a nuclear isolation using trypan blue (Figure 3). DeNovix recommends the use of fluorescent assays for quantifying isolated nuclei where possible, due to the increased accuracy ensured by the clear differences in green and red signals. It should be noted that counting debris laden samples using trypan blue can increase the number of erroneous counts either with an automated cell counter or by manual count.

The numbers of nuclei and intact cells are used to quantify the extraction efficiency for a sample to ensure that enough nuclei are available for the subsequent experiments.

10x Genomics® is a registered trademark of 10x Genomics, Inc. and is used for identification and references purposes only. DeNovix, DeNovix products and this website are not endorsed or authorized by or in any way affiliated with 10x Genomics, Inc.